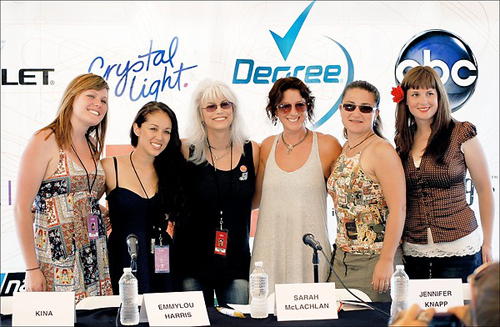 No doubt, one of the most anticipated dates on my calendar this year, I had the opportunity to catch up with Lilith Fair 2010 in Kansas City and St. Louis this July.

First, it was a bit of a crap shoot ever getting a spot. (There’s not a girl with a guitar on this planet that wouldn’t consider all kinds of bribery to get this gig!) At the time that Sarah McLachlin & Co. were putting their line-up together, I was hardly worth mentioning. I hadn’t toured in years and didn’t even have a record pieced together. Most folks had only heard a whisper of my return. On a wing and a prayer, we tossed my hat in the ring and hoped…and to my surprise and honor, I got a couple of days!

Two dates are better than none, especially when you get to see up-close performances Sarah, Emmylou Harris and Mary J Blige!

I dunno why, but I’ve never been one to get too excited about things. About the best you get out of me is a wry smile and a laid-back response like “Yeah, that was very cool.”  It takes a lot to get me jumping up and down, but Mary J’s performance in St. Louis had me stupid with excitement. I actually got out of my seat and jumped up and down a few times. I seriously thought my head was going to explode in joy ala Femme-bot style!

Considering how hot and unholy the weather was, it was a miracle I could even move at the end of the day. Everything was burnt to a crisp and then made soggy by hours of sweating. Fortunately, there were little patches of shade we could all share, have a chat and take a few photos. I don’t know why any of you would have wanted to even come near me, but then again, you guys were just as gross as I was! Nonetheless, I met some fabulous people. Not to mention just how humbling it was to have folks show up just cause they knew you’d be there.

By far the best moment was being on stage and watching my family come over the hill. Like I said, it was a miserably hot day, but they braved the weather. It gave me a chance to perform Mr Gray for my Grandparents for the first time…for which I received the most beautiful, sweaty kisses. Seriously, how much better can you get…

Behind the Scenes video HERE